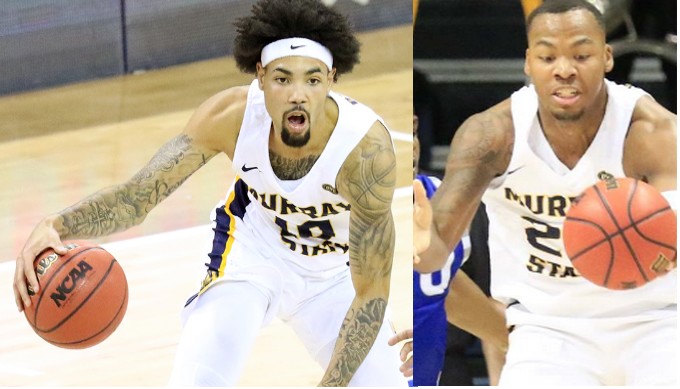 With the 2020-21 college basketball season just around the corner, the Murray State men's team is prepping for a run at a fourth-straight Ohio Valley Conference regular season title and two of the main characters with a big part in the effort are juniors KJ Williams and Tevin Brown.

Brown, from Fairhope, Alabama, is one of the top long-range shooters in the nation and Williams, from Cleveland, Mississippi, is the strong inside force that scores and rebounds at the top of the Ohio Valley Conference.

Combined, the duo scored 977 points in the 2019-20 season when the Racers shared the Ohio Valley Conference regular season title with Belmont at 15-3.

Tevin Brown has been one of the top shooters in the OVC season from the start, when he played an important role in MSU's 2018-19 season that ended with a win at the NCAA Tournament in Hartford. Brown's first season saw him make a record-tying nine 3-pointers in a game at UT Martin that resulted in his career-high of 31 points.

In two seasons, Brown has already made 175 3-pointers, which is ninth in MSU history. He goes into his junior season in November with 960 points.

Williams set the Murray State single-season field goal percentage record in his freshman season when he made 69 percent on 111-of-159, as he topped the previous mark of 68 percent (115-167) by Tony Easley in the 2007-08 season. In the last two seasons in the OVC, Williams (267-446) is second in overall field goal percentage with a percentage of .598. His career field goal percentage is fourth all-time at MSU as Williams enters his junior season for the Racers. He has 648 career points.

The OVC schedule is being constructed by the league office and a working group from member institutions. The 2020-21 schedule for the Racers both in conference and out, will be released soon.

The Racers carry a 21-game home winning streak into the season at the CFSB Center. MSU's all-time home win streak of 47, between 1996 and 2000, is still the standard in the program.

Gabby Kennedy: Ready to Bounce Back