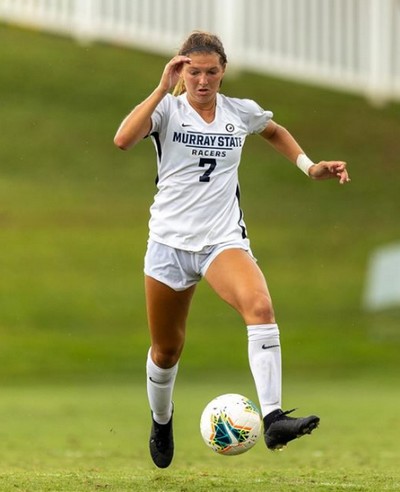 After winning their match on Sunday over Southern Illinois, Rebecca Kubin and Morgan Bodker were honored by the Ohio Valley Conference this week and named Offensive Player of the Week and Defender of the Week respectively, for their efforts in the match.

Kubin, a fifth-year player for the Racers and one of the most prolific goal scorers in the history of the Murray State program, scored a goal in the 51st minute of the match on Sunday and added an assist on a key insurance goal late in the match. The goal was Kubin's 27th in her career, the fifth most for a career at Murray State. This is Kubin's first OVC weekly honor for the season.

A freshman Defender out of Sunbury, Ohio, Bodker played a key role on a Racer defense that allowed just one goal against the Salukis. The Racers Center back scored a goal in the 21st minute of the match on Sunday and added an assist on a free kick in the 51st minute. This is Bodker's second OVC weekly honor this season.

The Racers will be back in action on Sunday (Sep. 26) at 1 pm against Cincinnati at Cutchin Field in Murray, Kentucky.

Bennie Purcell Courts to be Upgraded