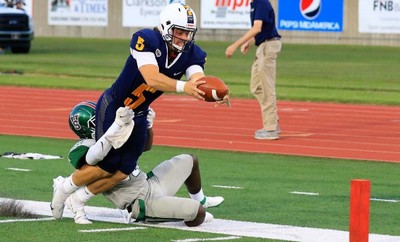 Redshirt junior quarterback Preston Rice of the Murray State football team has been named as the Offensive Player of the Week by the OVC for the first week of the 2021 season, the league announced Monday.

Rice became just the 11th Racer in school history to score four rushing touchdowns in one game in last week's 35-0 season-opening win over Mississippi Valley. The redshirt junior rushed 11 times for 81 yards and was also 10-for-16 passing for 148 yards with only one interception. Rice's first score was from 38 yards out in the first quarter and he followed that with touchdown rushes of one yard, five yards and one yard, respectively.

On Saturday, the Racers face a tough test, as they travel to FBS eighth-ranked Cincinnati. Kick-off from historic Nippert Stadium is scheduled for 2:30 p.m. CT.