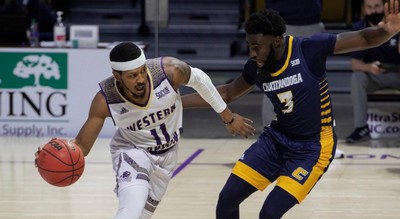 Kentucky native Mason Faulkner, a graduate transfer from Glasgow, Ky., who played the last two seasons at Western Carolina University, has signed a financial aid agreement to continue his collegiate basketball and academic career at the University of Louisville.

A two-time All-Southern Conference and NABC All-District selection, the 6-1, 190-pound Faulkner led Western Carolina with 16.9 points and 4.8 assists per game as a redshirt senior in 2020-21 when he led the SoCon in assists and ranked ninth in scoring.  As a junior in 2019-20, Faulkner averaged 17.7 points, 6.0 rebounds and ranked 19th in NCAA Division I in assists at 6.0 per game.

"We are excited to have a player of Mason's caliber and experience in our program," said UofL Head Coach Chris Mack.  "He has the ability to play both guard positions in the backcourt, has experience playing in high-level collegiate environments, and is effective both scoring the ball and setting up his teammates as a playmaker.  We are glad to welcome him to our team and back to his home state of Kentucky."

The 2021-22 season will be Faulkner's sixth year in collegiate basketball after applying the NCAA's one-year COVID-19 waiver from last year.  He played two seasons at Northern Kentucky (2016-18), redshirted the 2018-19 season after transferring to Western Carolina, and played there two years from 2019-21.  He has scored 1,343 career points in his four collegiate seasons and handed out 434 assists, scoring in double digits 59 times while reaching 20 or more points in 23 games.

Faulkner scored a career-best 31 points against Chattanooga on Dec. 3, 2019 as a junior.  He produced two triple-doubles as a junior at Western Carolina:  against North Carolina A&T with 13 points, 10 rebounds, and 10 assists on Nov. 12, 2019; and 16 points, a career-high 12 assists and 10 rebounds against Samford on Feb. 26, 2020.  He buried three game-winning shots as a senior at WCU:  a buzzer-beating three-pointer in overtime against Tennessee Tech, a floater with 5.5 seconds left against The Citadel, and a three-pointer with 53 seconds to play at SoCon champion UNC Greensboro.

He earned a bachelor's degree in May from Western Carolina in communications with a minor in sports management.  He plans to pursue a graduate degree in criminal justice at UofL.

Faulkner began his collegiate career at Northern Kentucky, where he played in 65 games over two seasons, averaging a combined 6.5 points and 2.1 rebounds per game, including a 7.4 point per game average as a freshman.  In his two seasons at NKU, he scored in double digits on 14 occasions and had four or more assists in 15 games.  His top scoring effort for the Norse was 29 points -- including 23 in the second half -- against Detroit Mercy on Jan. 22, 2017 as a freshman.

A former Kentucky Mr. Basketball finalist from Caverna High School in Horse Cave, Ky., Faulkner led the Commonwealth in scoring as a senior in 2015-16, averaging 35.9 points per game while also averaging 10 rebounds, four assists, and 2.1 steals per game. He finished his prep career with a school-record 3,148 career points scored and over 600 career rebounds.  He was an all-state selection his final two high school seasons and was named the co-Fifth Region Player of the Year.

Faulkner initially signed with Colorado in April for his final collegiate season and had been on the Buffalo's campus before opting to transfer to Louisville.  He had surgery on his right ankle in June to repair a lingering issue and is expected back on the court in late August or September.

Faulkner becomes the eighth new addition to the UofL roster this season and sixth transfer, including two from junior colleges.  The list of newcomers also includes Matt Cross, a 6-7, 225-pound forward from Beverly, Mass., who played his freshman collegiate season this year at the University of Miami (Florida); Sydney Curry, a 6-8, 260-pound forward from Ft. Wayne, Ind. who played the last two seasons at John A. Logan College in Carterville, Ill.; El Ellis, a 6-3, 175-pound guard from Durham, N.C. and Tallahassee (Fla.) Community College; Mike James, a 6-6, 195-pound guard/forward from Oak Ridge High School in Orlando, Fla.; Noah Locke, a 6-3, 207-pound guard from Baltimore, Md., who played three seasons at the University of Florida; Jarrod West, a 5-11, 180-pound guard from Clarksburg, W.Va., who played four seasons at Marshall University; and Roosevelt Wheeler, a 6-10, 240-pound forward/center from John Marshall High School in Richmond, Va.