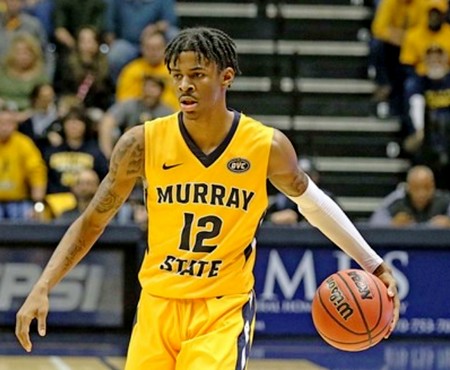 The Nashville Tennessean asked the following question in a headline in today's paper, "Will NBA prospect Ja Morant from Murray State struggle against Belmont again?"

If you don't know any better, you might think that Morant had played several games against Belmont and had been stymied every time. Of course, that's not the case at all.

Now he didn't shoot the ball well in either game, hitting 2-of-9 shots in the first game and 4-of-13 in the second game. He did make 3-of-7 shots from behind the arc in the second game, which is actually pretty good.

But, Jonathan Stark was the man for the Racers' last year, not Morant. And, Terrell Miller was his sidekick. Morant was just a freshman, and was third in the pecking order, at best. And the turth is, Belmont didn't even focus on trying to stop him.

"Morant's interesting because a year ago he played third fiddle to their best two players," Belmont's head coach Rick Byrd said. "We really kind of went under ball screens and didn't feel like he could make shots good enough for us to worry too much about him. And now he's going to be a top three or four pick in the NBA draft."

Belmont didn't contain Morant last year. He deferred to Stark and MIller. And he didn't shoot the ball well in a couple of games. Big deal.

Let's see how things play out on Thursday when Murray State hosts Belmont at the CFSB Center.

Runnin' with the Racers: Tevin Brown with Dave Winder